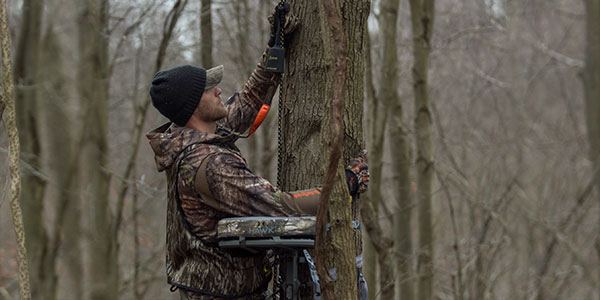 September is Treestand Safety month, and whether you’re a long-time stand hunter or using one for the first time here is everything you need to know to hunt high safely this fall.

iSportsman COO Doug Howlett was at a disabled sportsman’s event some years back when he experienced a frightening realization; the majority of wheelchair-bound hunters in attendance lost their ability to walk after accidents involving falls from treestands.

“I used a climbing stand a lot back in those days and, honestly, rarely used a harness because I felt it got in the way,” Howlett says. “Since that event, I haven’t gone up in a climber without one. Like I had done a hundred times before, none of those hunters I met that day went up a tree and expected their day would end with them in serious trauma.” In fact, today, hunters are more likely to be injured or killed in falls from treestands than being hurt in a firearm incident—like 90 percent more likely.

Fortunately, hunters today are much more educated about the inherent dangers treestands present and how to stay safe, and much of this awareness is thanks to organizations like the Tree Stand Safety Awareness Foundation (TSSA). TSSA is a small non-profit organization established in 2017 by a team of outdoor industry professionals with one core value in mind: to educate the hunting community to safely use tree stands in the field. Founding President Glen Mayhew is a man of many hats, an outdoorsman himself who serves as a hunting educator in Virginia and is an Associate Dean of Health and Human Services at Radford University with a background in firefighting and paramedics.

“My research is in treestand falls. I collect various data from across the country because there is not a database of these falls,” Mayhew says. Mayhew uses National Electronic Injury Surveillance System data, a federal database maintained by the consumer product safety department. For Mayhew, it’s not an easy job.

As he explains, because the database consists of all injuries involving manufactured products, his job is to go through and find the ones that were falling incidents. According to his research, which TSSA shares on their website, there were 2,379 treestand falls in 2020 that resulted in an injury requiring emergency care. Part of TSSA’s goal is to reduce that number by 50 percent by 2023. There is, however, some good news.

When looking at the data from 2017 to 2020 there has been a 40 percent decrease in the estimated number of treestand falls recorded on the national level.

Which is why the TSSA introduced the ABCD’s of treestand safety.

Always remove and inspect your equipment: One of the top three reasons for falls is strap failure, according to Mayhew, but it’s not the fault of the strap—its due to hunter negligence. “We’re leaving our stand in place season after season,” which causes safety materials to wear down and fail. Thoroughly inspect your stand when preparing for the season and check for rust and damage, particularly the straps you have in place to hold the stand tight to the tree. Always contact the manufacturer for replacement pieces when damage is found, and never continue to use a damaged treestand.

Buckle on your full-body harness: “Always wear a full body harness every single time you are off the ground. That includes putting the stand up and taking it down.” Mayhew stresses. The New York Department of Environmental Conservation released a report in 2018 that stated though 84 percent of firearm hunters and 91 percent of archery hunters use elevated stands ONLY 33 percent of archery hunters and 23 percent of firearm hunters used safety harnesses.

Connect to the tree before your feet leave the ground: Your safety harness will be of little use if it’s not properly attached. According to TSSA, 86 percent of victims were not wearing a safety harness, and 99 percent did not have their harness properly attached to their stand and tree when they were actually climbing up or down from the stand. As per TSSA recommendations, if you don’t have your full-body harness, DON’T CLIMB and instead hunt from the ground. “You can wear that harness all day long but unless it’s connected, it’s just another piece of clothing,” Mayhew says. He compares not connecting your harness to skydiving without pulling the cord on your parachute. It just doesn’t work.

Destination, share your location before every hunt: “One of the common themes that I was seeing in many of the fall incidents is that it was taking hours—if not until the next day—to locate individuals who had fallen from their treestands.” Mayhew explained this year’s newest addition to the TSSA’s ABCDs, “Every minute counts for critical care.” Sharing your destination allows for your hunting party and loved ones to locate you in the case of an emergency. “Utilize the apps, plot your stands, share that with your loved ones, share that with [your] hunt clubs, so people know where to start looking if something does happen.” Mayhew says.

For those new to hunting, or new to stand hunting Mayhew offers a few tips.

“First and foremost, read the instruction manual. Practice with your stand before you ever get into the woods and practice at a low level,” he says. As far as type of stand recommendations, when it comes to ladder stands, climbing stands and lock-ons, “they’re all safe when you follow the guidelines.” Mayhew did stress, however, “we don’t recommend homemade stands.”

Many of you have run into that hunter who claims they can “grab a limb” on the way down if they do fall; Mayhew has run into them as well, and he shared how he solidifies the reality of that situation.

“You might think it’s going to happen, but from a physics standpoint—it’s not going to happen,” he says. Furthermore, the force at which you hit the ground from a fall is devastating to the human body. At 20 feet, a fall for a 180-pound hunter will result in them hitting the ground with 13,731 pounds of force. Mayhew uses the analogy of an MMA fighter, whose punch pressure has been measured to be about 1,000 pounds of force.

“Imagine fourteen of those MMA boxers or fighters surrounding your body and hitting you at one time. That’s the amount of force that your body is feeling for a split second,” Mayhew says. “Of course, as your body weight goes up the impact is greater.”

Mayhew stressed that treestand hunting is a fun and safe way to hunt, and can be for everybody, however, the importance of following the TSSA ABCD’s is crucial.

“By practicing these four simple steps, you can fully enjoy your treestand hunting experience and come home safe to your family and friends,” he says. And, really, there is no better motivation than that.