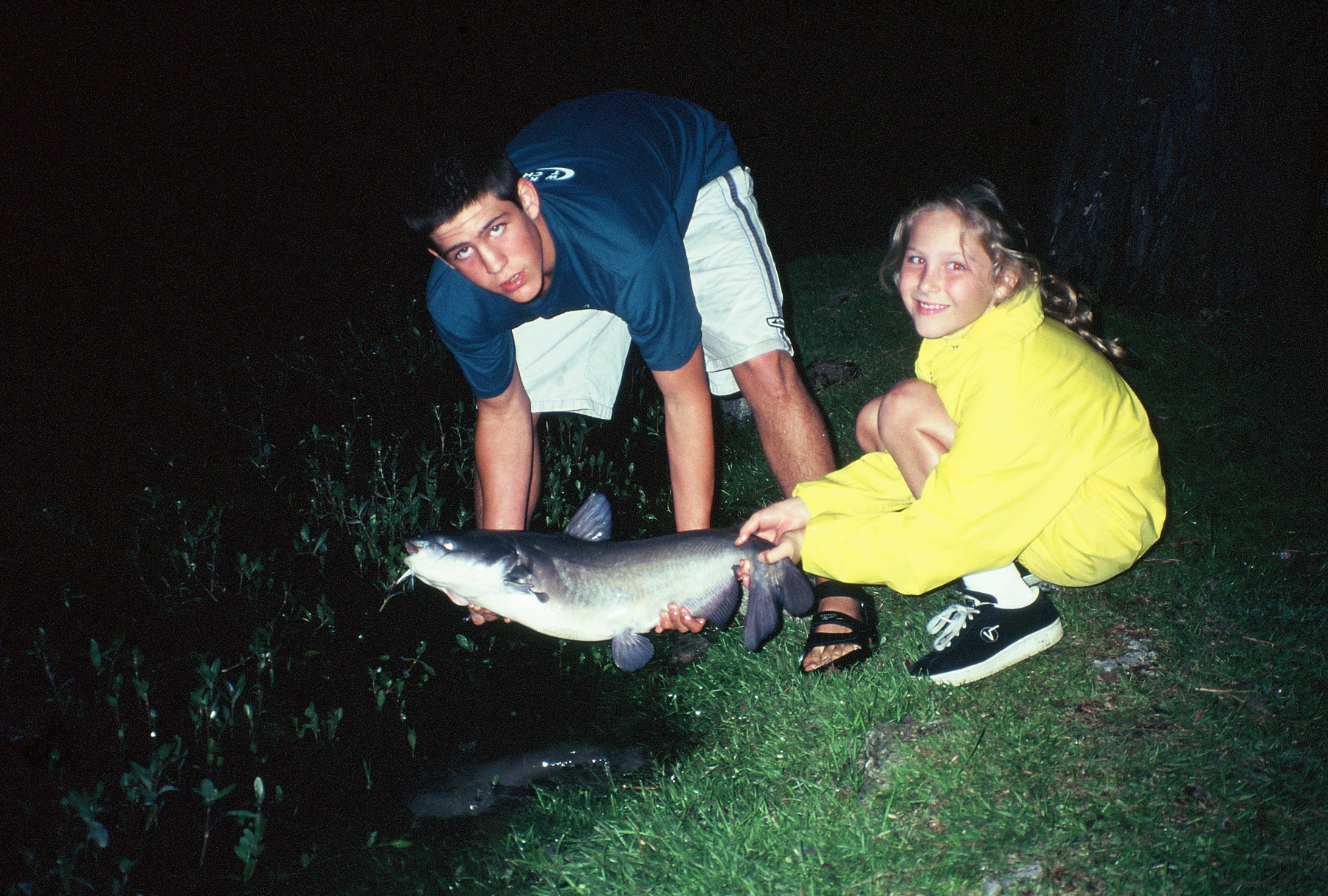 Catfish, at least big ones, are notoriously nocturnal–especially in summer when water temperature is hot, the sun is bright, and recreational boat and motor traffic are heavy on many lakes and rivers.

A lake or broad river jammed with big and hungry catfish–channels, whites, blues or flatheads–may seem devoid of Mr. Whiskers during the day. But when the sun sets, cats go on the prowl.

It’s important to remember that catfish have an extremely well-developed olfactory system, so they move long distances to baits they “scent” at night. A catfish’s barbels, or “whiskers,” allow it to taste, touch and smell–which makes it a very efficient night predator, as well as a deadly one in turbid water. The fish also are good sight feeders, especially the channel cat–which commonly are caught with jigs and crankbaits even at night.

While some anglers believe any old bait soaked anywhere on the bottom at night will catch catfish, there are more refined and effective methods to consistently catch sundown cats.  Fished for in the correct manner, hook-and-line night catfishing often yields more and larger catfish than any other way.

Mature catfish relate to bottom structure much the way big bass, walleyes and other sportfish do. Creek channels, ledges, long tapering points, deep bends in creeks and rivers, and river-creek junctures all are prime places to locate summer catfish. Such deep structures are important keys to catfish location, but at night, fishing in deep water usually is less productive than fishing near deep water.

A shoreline point, for example, that extends far out into a lake or river, then abruptly drops off to a deep 20-foot channel is a prime structure for night catfishing. Often cats move out of deep water and prowl the point, looking for food—but usually in much shallower water than they hold during the day when they’re not as active.

Although still-fishing is most often associated with catfishing, drifting or slow trolling from a boat with an electric motor is a deadly way to search for aggressive, night-feeding catfish.  This is the way famed TV angler Bill Dance likes to fish for cats. Dance says to “stay mobile,” meaning that night anglers should fish baits on the bottom, but drift or slow troll over structures that lead to deep water. Dance especially likes river bars or main lake points for night catfishing. Repeated night drifts over such structures frequently result in hefty catches of cats for the Tennessee angler.

Fathometers are invaluable for successful night catfishing, even on lakes and rivers anglers believe they know like the backs of their hands. Small drop-offs, little fingers off points, tiny holes and irregular bottoms easily are “seen” with a good depth finder, and all such areas can hold big, feeding catfish other anglers overlook.

Catfish also can be found near deep weed edges at night, particularly in clear lakes where weeds frequently extend to 6, 8, even 10 or 12 feet of water. Such places hold forage fish, and where there’s food there are predators like catfish.

Other good structures for night catfishing are dam tailraces, docks and piers. Such places are particularly productive for summer night cats if large lights shine down into the water.  Lights attract shad, shiners, bluegills and other small fish, and that brings catfish. Usually, the biggest cats lay just outside the halo of light cast down into the water. Work baits slowly along dark edges just outside lights.

While chicken gizzards and livers, nightcrawler worms, and “stink baits” account for a lot of night catfish, there is little question that fresh fish baits are the most productive offering, at least for big, mature cats. Shad and shiners are preferred in many areas.  Some anglers employ fresh whole dead baits but scale them before use so they emit more scent to attract catfish. Some anglers use fresh gizzards from shad, as they stay on a hook well and so are less likely to be nibbled off by small baitfish.

Many anglers consider live baits the ultimate night catfishing medicine. Bluegills 3-to-5 inches long are excellent in states where such baits are legal. Cats also are regularly caught with live shiners, chubs, even little white bass and perch (again where legal to use). Giant flatheads are particularly vulnerable to whole live baitfish. Using good size live baits 3-to-5 inches in length helps avoid hooking small catfish that can get in the way when big fish are your nighttime target.

In some coastal waters, marine baits that migrate into freshwater can be excellent for night catfish. Whole live marine shrimp, pieces of crab, cut pieces of eel (maybe the best bait of all), mullet, marine shad and herring all are very productive when such baits are indigenous to the water. A monstrous 86 1/4-pound blue cat was caught on a cut herring bait by a bank angler fishing the Cooper River tailrace below Moultrie Dam not far from Charleston, South Carolina.

As a general rule, cats are caught on the bottom, with slip-sinker terminal tackle arrangements like the Lindy Rig, drift rigs or heavily-weighted still-fishing set-ups.

A basic 3-way swivel rig is serviceable for most catfishing. The pound test line used depends on the size of fish, water depth, and (in rivers) current. For most night catfishing 12-to-20 pound test line is good. Tie the line directly to one ring of a 3-way swivel.  To a second ring of the swivel tie a 12-inch length of 10-pound test line that’s attached a 1/2- to 2-ounce bell sinker. The weight of the sinker is determined by river current speed or water depth. Use just enough weight to maintain contact with the bottom. The 10-pound line will break before the mainline, should the sinker foul on the bottom, which prevents losing the entire rig.

To the third ring of the swivel tie an 18-inch leader of 20-pound line, attached to a 1/0-to-3/0 offset-shank bait hook, like the Kahle or Tru-Turn. Much of the time such hooks barb a catfish in the corner of the mouth, where it’s tender. The mouth corner also has very tough, leathery skin, and once the hook is set there the fish almost can’t get rid of it.

The three-way swivel rig when fished in current or when slow trolled or drifted, presents a bait just off the bottom, which is where night catfish prefer feeding. The rig can be fished from an anchored boat, or from shore, but many veteran anglers like Bill Dance prefer drifting in a boat and “tight-lining” the rig when night catfishing.