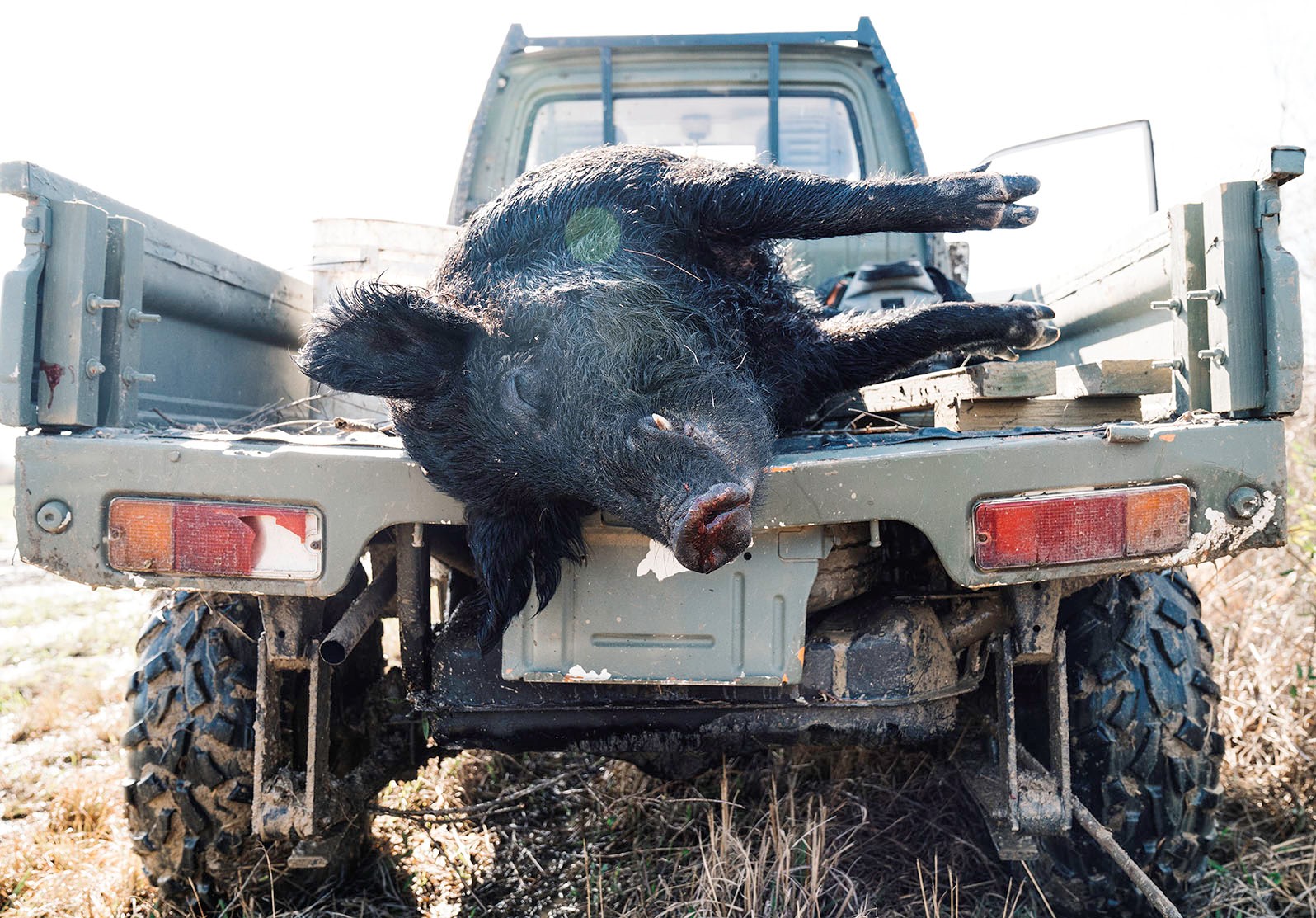 Not So Rare Air

Stalking giant porkers with air rifles puts the challenge back into Texas hog hunting…or hog hunting anywhere for that matter.

Luke Clayton puts the good ol’ into good ol’ boy like few people can. The easy going Texan with the deep Lone Star baritone hosts his own outdoor radio show familiar to many sportsmen in the state. He’s also an accomplished writer who not only pens columns and stories for newspapers and several Texas hunting mags, but he literally wrote the book on hunting and fishing in Texas. Ok, well, he wrote a book called Hunting and Fishing in Texas…pretty much the same thing.

Where Luke breaks the mold of the average outdoor expert is when it comes to airguns. Luke loves them, and he knows as much about them as few people I’ve ever met. That’s how I came to know the Texas personality. I was the editor-in-chief for a short-lived predator hunting magazine called Fur ‘N Fangs and the publisher wanted to run a regular column in the magazine on airguns.

“Who the heck am I going to get to write a regular column on airguns?” I asked. It seemed to be a narrow topic, and there was only one guy I knew who really knew the subject, and he was already writing for a rival publication. Turns out there’s at least two guys (and today, no doubt plenty of others).

“Try Luke Clayton,” a former colleague I consulted with said. “He did some stuff for us a couple times and really seemed to know the subject.”

So, I reached out to Luke and the kind, knowledgeable sportsman was only too happy to help. And it was through editing Luke’s stories and working with him on assignment topics for nearly two years that I learned there was much more to today’s airguns than I had ever imagined…way more.

These weren’t the lever-action or pneumatic-pump BB guns and pellet rifles of my childhood. In the pages of that magazine Luke brought fantastic tales of modern air rifles capable of cleanly killing wild hogs, deer, turkeys and even large dangerous African game such as Cape buffalo. But it wasn’t until he invited me to East Texas one January to pursue hogs with Mark Balette’s B&C Outfitters in Groveton, Texas, that I got a first-hand look at how awesome these air rifles really are.

Balette’s operation is nestled a relatively short drive from both Houston and Dallas, where he caters to executive sportsmen who are seeking hunts for exotic game and other critters. The operation was a perfect test laboratory for pursuing hogs with airguns, and while the air rifles would prove plenty lethal, the hunt was anything but a gimme. 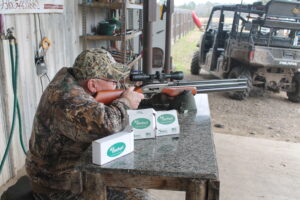 Luke had talked with Val Gamerman, president of Pyramyd Air, the country’s leading online retailer of all things that combine sporting interests powered by air. Big bore air rifles are front and center among their growing consumer market and one of the hot sellers was Air Venturi’s Seneca Dragon Claw, a .50-caliber beast of an air rifle capable of pushing a 350-grain bullet out of the muzzle at 230 ft-lbs of energy, as well as bolts tipped with talon sharp broadheads. We shot at least five to six shots from each rifle before any noticeable air pressure resulted in shots beginning to drop a little. It was impressive for sure.

Arriving at B&C Outfitters, fellow outdoor writers Joe Arterburn, a Cabela’s alum and former mayor of Sydney, Neb., as well as Larry Chesney, the one-time editorial and a current story-telling power behind Sporting Classics magazine, along with Clayton, broke out the stash of Dragon Claws (gotta love a name like that for a gun), filled them with air (they can take up to 3,000 psi of max fill pressure for 500ccs of total air capacity in their dual air chambers) and started accurately punching holes in paper at 25 and 30 yards just to ensure they were all “on.” Each of us needed to get comfortable with how to load, cock and shoot the rifles, as for Arterburn, Chesney and myself, it was our first time shooting an air rifle of this caliber and design.

We had barely been on the ground for several hours from our flights and Balette was already driving us to our stands where we would hunt that first evening. As mentioned, B&C Outfitters is primarily a several hundred acre high-fence operation for exotics and some hog hunting as well as offers free-range hunts for deer and hogs outside the fence. For our purposes, we planned to hunt off feeders (de rigueur in Texas) inside the fence, the trip being more about testing the effectiveness of the high-powered air rifles on thick-hided, hog-sized game than creating an overly difficult hunt experience. 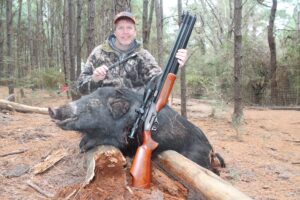 The author with his East Texas air rifle hog taken with an Air Venturi Dragon Claw supplied by Pyramyd Air.

Feral hogs in Texas, like virtually every state where they are found except California, are treated as a nuisance species, with no season dates, legal shooting hours or bag limits. The idea from a management standpoint is to remove them at virtually all costs. Fortunately, they are also fun to hunt and even better to eat. They also reproduce so quickly, and once hunted, become quite wary, meaning, it is folly to think man will every wipe them completely out of an area.

For reasons Balette wasn’t even sure of, the wild hogs inside his fence moved around more openly during the daylight hours than those outside the 4-mile perimeter. For reasons we were never sure of, it turns out, hogs inside a giant high-fence operation are just as challenging to hunt as they are on the outside, especially when the ante on that challenge is upped with the close-hunting required of an air rifle.

Over our two-day Texas hunt, we would hunt both from elevated stands as well as from the ground. On my first evening, I had a group of hogs, loudly make their way through the forest behind me to the feeder. A few early arrivals, small piglets, fed a mere 15 yards from me, but I held off, assuming the entire bunch would just pile into the area near my stand and feed giving me time to size them up and select the right one I wanted to send home with Clayton for sausage. They didn’t. In fact, the larger group never stepped into the open, moving steadily off to my right and dragging the only small critters I could see in front of me with them. “So much for that,” I thought.

A short time later, as the shadows began to lengthen, I spotted a sounder of hogs feeding out in an open area. They were at least 200 yards away, but appeared to be working toward the point of a small finger of pine trees that jutted into the prairie. I decided to use the cover of those pines to make a stalk. Keeping the wind in my face, I worked to within 50 yards of grazing group.

There was a large, blond-colored boar in the group I wanted to take, but he remained on the far side of the group. Another large, black-colored male stepped from behind a tree right at 25 yards away, but by the time I gave up on ever getting a shot at the blond and decided to go ahead and take the black one, he was bumped into by another pig and, startling each other, both ran off, spooking the entire crew into running their direction as well. I returned to the lodge that evening, empty handed. This wasn’t going to be as easy as I thought. I experienced better luck scoring on a bottle of bourbon shared with my campmates.

The next morning was much the same. Hogs moving through the thick East Texas brush, but never presenting a shot. By the afternoon, I decided to change my luck by changing what my Dragon Claw was loaded with. Instead of the heavy-grain pellets, I loaded the rifle with a bolt. Like an arrow or bolt fired from a crossbow, you simply slipped the bolt, tipped with your favorite broadhead, into the barrel and are ready to hunt.

I eventually had a nice size porker working down a fenceline in front of me about 20 yards away and using a thigh-thick pine tree as a brace, sent the bolt flying into his shoulder. The force dropped the hog in its tracks. I had one on the boards. Before the afternoon was up, both Chesney and Arterburn would also score, Arterburn taking the most beastlike porker of the group.

The killing power of today’s high-powered air rifles is amazing to say the least, especially to someone who grew up in an age when air guns were only suited for birds and squirrels. They also present another excellent device in the hunter’s arsenal for upping or altering the nature and challenge of his hunts, are much gentler on the ears, and where recoil is concerned, the shoulder as well, and quite simply put are a lot of fun to shoot.

Not So Rare Air