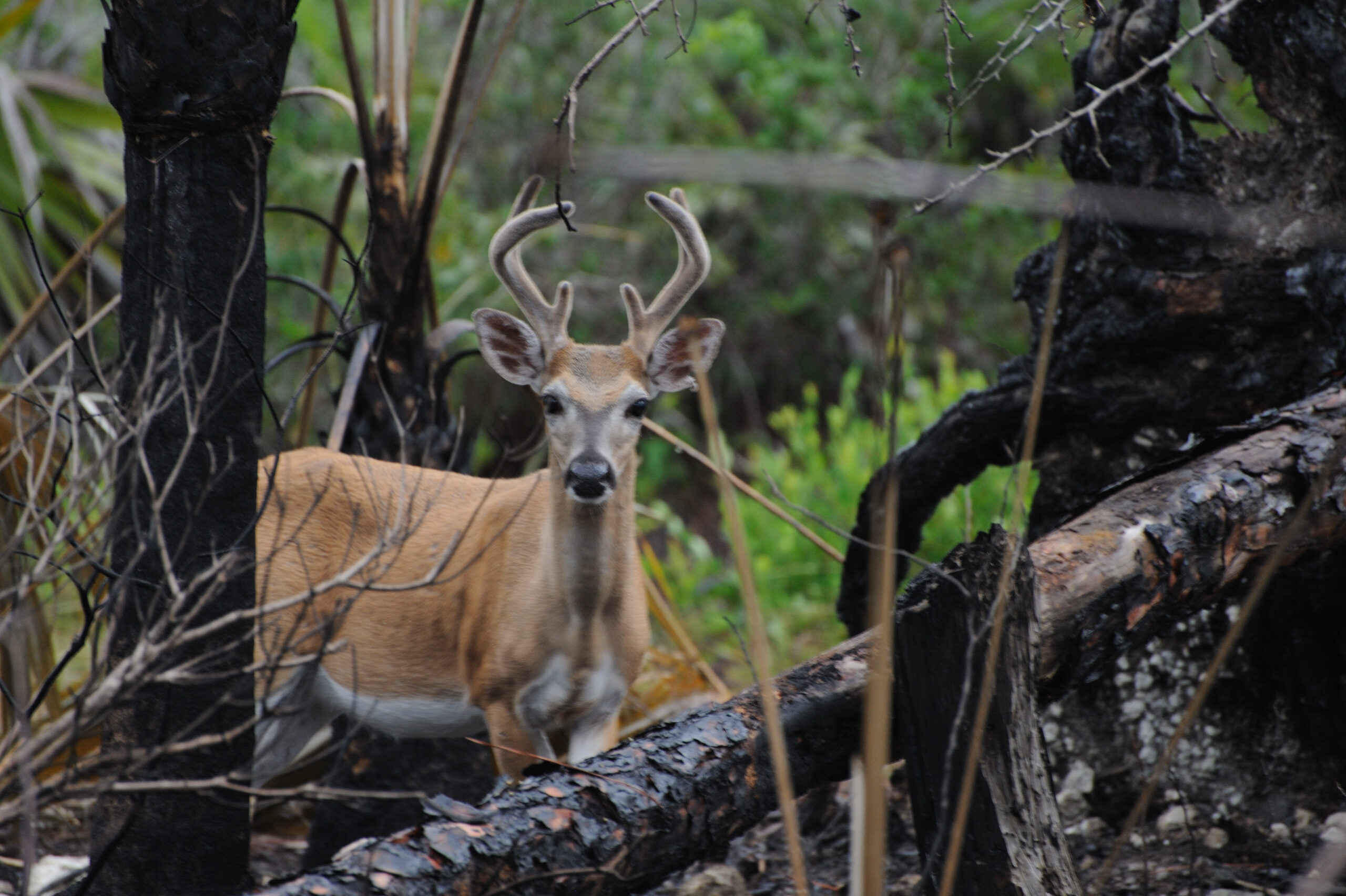 How a protected species of deer is making a strong comeback in the Sunshine State.

On average, the African Rhinoceros has a protective layer of skin ranging anywhere from 1.5 to 5 centimeters thick–rendering most assaults on the multi-ton rhino obsolete. Saltwater crocodiles are equipped with a formidable jaw capable of clamping down more than 16,460 newtons of bite force on their enemies. Compare this to a lion’s measly force of about 4,000 newtons of force, and you have a mechanism of defense that outcompetes most other predators.

Unfortunately, for both African rhinos and saltwater crocs, the Key deer possess a method of defense that is exorbitantly more effective than both thick skin and a powerful jaw: They have the Federal Endangered Species Act.

As a result of decades of poaching and habitat loss throughout the Florida Keys, the Key deer suffered a massive decline in population. A census conducted by the U.S. Fish & Wildlife Service of the deer in the 1950s found only a few dozen remained. Years of public pressure from conservationists followed, spawning the state of Florida working with the federal government to create what is called an Area of Critical State Concern (ACSC), which put an emphasis on protecting endangered species in certain areas–in this case, the Florida Keys.

Eventually, the number of Key deer began to rise in 1967 after the species was officially added to the Federal Endangered Species Act. Today, the number can be found closer to a thousand with a majority of the population concentrated on a few key islands (no pun intended). Ever since then, the Key deer have been rising in numbers and brazenness.

Standing at an “intimidating” average height of less than one meter and weighing somewhere in the range of 50 to 100 pounds, the Key deer is North America’s smallest species of deer. This subspecies of whitetail is native to the Florida Keys where they inhabit only a few islands, thus technically making them a tropical species.

The smaller build of the Key deer does nothing to hamper the animal’s intelligence. Key deer are always quite aware of their surroundings, and apparently aware of their legal status, too. Endangered species laws designed to protect the deer make it so campers, fishermen or boaters who even touch a Key deer will, by force of law, be labeled a wildlife molester.

This (amongst other factors such as no natural predators) has caused Key deer to act fearlessly among campers. Human interactions with deer such as illegal feeding have conditioned many deer to approach humans, leading to unhealthy conditions and habits. The deer are notorious for sneaking into campsites and relaxing side-by-side with people where they hope to score a meal. The deer often sit by the campfire and seemingly beckon campers to pet them (which the campers refuse lest they be labeled a wildlife molester). The more mischievous deer even attempt to steal supplies from camps.

The Boy Scouts of America have a camping program called Sea Base where Scouts row out from Key West and camp on an island where they learn about the island’s habitat. However, many Scouts get a cold lesson about loops in the food chain while they are there as there have countless reports of the friendly deer entering camp, and then mischievously stealing packs of food and even nonfood related items, such as flashlights, rain jackets and cameras. The Boy Scouts, helplessly watching the deer make off with their equipment, can do nothing that might risk them getting in trouble for harassing the deer.

“I had never felt more betrayed,” says Ethan Kelly of Troop 800. “One was lying on the ground next to the log I was sitting on and looking up at me with these deep brown eyes. Next thing I know, its friend had snuck up and swiped my bear bag. I tried to reason with it–telling the doe that there was chocolate in there and that chocolate probably wasn’t good for deer. But did she listen? No. She just walked off with my bear bag and never looked back, her stride never breaking. I had never felt so aware of my place on the food chain.”

Where does all of the loot go? What do the Key Deer plan on doing with all of this stolen equipment? Why do the Key deer bully Boy Scouts?

One can only assume that somewhere out there, on an island in the middle of the Florida Keys, there is a mountain of treasure surrounded by the world’s most protected and fearless deer.