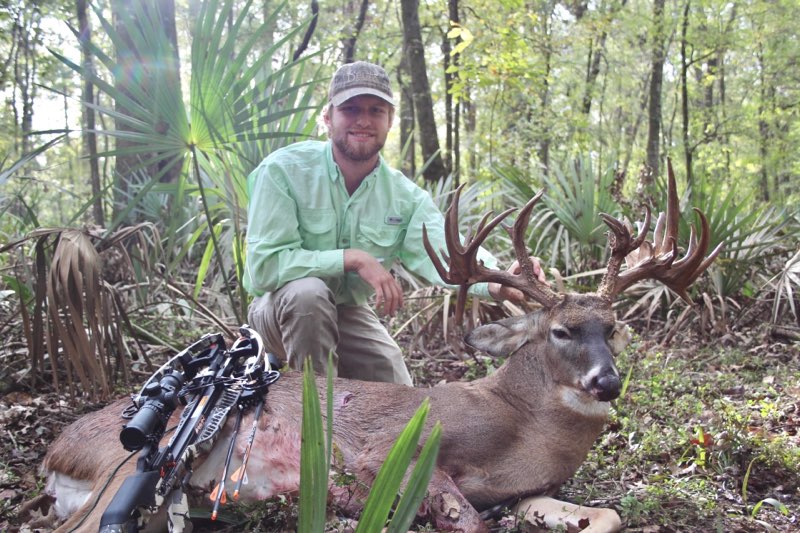 Brennan Morris proves it’s better to be lucky than good any day, and on some days it really pays off to be a little of both!

Brennan Morris did everything wrong, and he’ll be the first to admit it. He even laughed as he described a hurried hunt that the 24-year-old farmer tried to slip in between sunrise and the time he had to jump into the seat of a tractor on the same farm he was hunting. The entire story can be found on Outdoor Life’s website now.

The buck he was hunting had first appeared on trail cameras three years earlier. Fellow hunter Dakin Hines was tracking the buck on cams and had a stand set among the palmetto-choked hardwoods where the buck seemed to travel between bedding and feeding.

There was a race to take the buck, now believed to be at least 5 1/2 or 6 1/2 years old. Not only was he a beast, but the woods where he lived were about to be logged. After the buck popped up on camera on Sunday Nov. 1, Hines hunted the stand with no luck, but had to work the next few days. He implored his friends to hunt his stand in his absence since he couldn’t be there.

“Someone has to get that buck,” he insisted.

Brennan Morris hunted it one evening with no luck, while his brother, Logan, hunted it the next evening. On Thursday morning, with Hines once again sidelined due to work, Morris decided to duck into the stand for an hour or two before he had to start working himself. Running late, in his work clothes and using a borrowed Ravin crossbow because he’d been so busy with work lately he hadn’t had time to practice with his usual compound bow, he climbed into the stand. He hadn’t been there more than 25 or 30 minutes when the buck the group was seeking appeared.

When it was all over, Morris had just arrowed a 46-point mammoth buck that scored on the Buckmaster’s scoring system 309 6/8 and should shatter the existing record buck for the state.

For the complete story and more photos, visit You Can Shoot a Giant 46-Point Buck (Even When You Do Everything Wrong) | Outdoor Life.