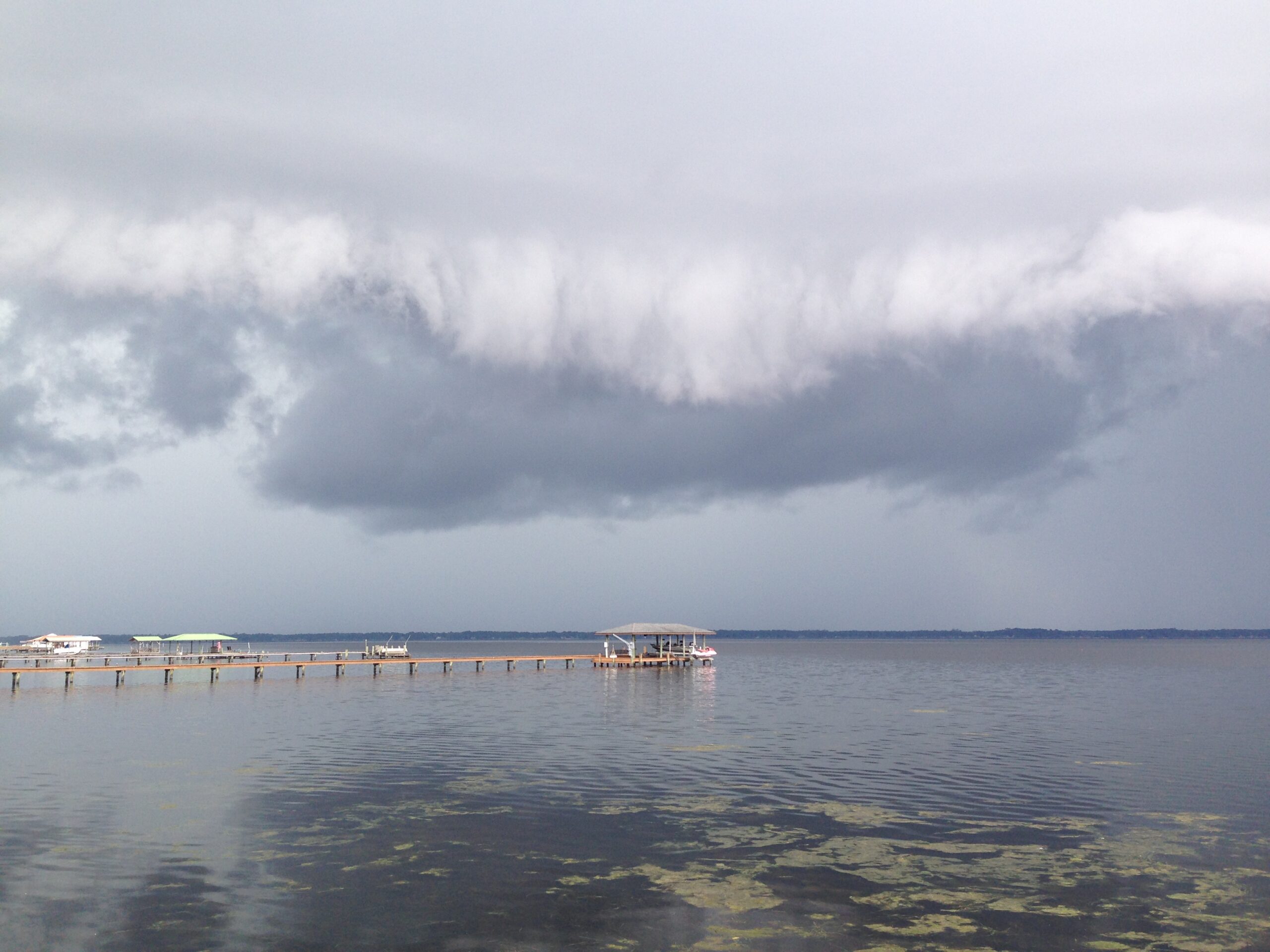 Time it right, and the best fishing you’ll ever enjoy—in freshwater or saltwater—is the few hours just before a cold front strikes.

“Fishing the fronts” is an old axiom of veteran fishermen across America. The theory is that if anglers can be on the water just before foul weather strikes, the fishing bonanza can be better than striking a gusher oil well in Texas.

Predicting when a front will hit isn’t easy, just ask any weatherman. And no angler should plan all his fishing around fronts. But since all serious anglers are weather watchers anyway, it makes sense to try and time trips just before a warm or cold front is expected.

As a general rule, the 2 to 4 hours just before a front arrives is the prime time for fishing. But occasionally—especially in summer when small, warm, rainy weather fronts are common—great fishing can be had while the storm pours raindrops on your head. One exception to this is really violent weather, the kind where lightning is cracking everywhere and extremely strong winds are whipping. Seldom is good fishing available during lightning storms, which is just as well, since fishing at such times is extremely dangerous.

Fishing action, particularly for bass, usually is very poor immediately following cold fronts. The late famed angler Buck Perry, the father of structure fishing from Hickory, N.C., was among the best at catching bass no matter what the conditions. But even Perry preferred to do other things than fish for bass following a severe cold front. Perry looked at fishing fronts in terms of light conditions.

“An angler should not think of weather in terms of temperature, but in terms of light penetration into the water,” he explained. “The lighter or brighter the weather, the tougher the fishing is, because fish do not have eyelids, so they go deeper to avoid the sun’s penetrating rays. The deeper fish are, the tougher they are to catch. So, obviously, the darker the weather condition, the better fishing is. And this is precisely how a cold front most directly affects all fishing, for all species, but most notably for bass as they are the most temperamental of fish.” 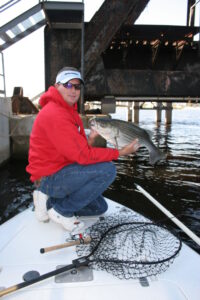 Perry emphasized that fronts generally mean cold fronts, and that cold fronts do not always mean there is a big drop in air temperature. The front is actually the dividing line between two masses of air. The difference in temperature of these two masses can vary – at times it will be great, while at other times hardly noticeable. The main difference between the two air masses is that one is warmer, holding higher moisture content, while the other is a drier mass of cooler air. The former is usually associated with a “low,” while the latter is associated with a “high.”

“The front itself usually has very rough weather, such as heavy rain, squall lines, thunderstorms, etc.,” Perry stated. “This is especially true when there is a great difference between the two air masses. For fishing, we must look at the front in terms of light penetration, since the brighter the light the least likely fish are to be prowling the shallows and feeding. The darker the light and the poorer the light penetration, the more likely bass will migrate into the shallows and will be available to anglers. So, since prefrontal conditions are normally dark with heavy cloud cover, this is the best time for fishing. Anglers who can time their fishing when fronts approach their favorite lakes, rivers, etc., are likely to have good results.

“On the other hand, after the front goes through, the cooler mass of drier air moves in, and we normally have a completely washed out condition with a bright, clear sky. This is the worst time for most fishing, since the bright light drives gamefish deep, where they are difficult to reach with lures and baits, and they are in a difficult, dormant state, making them hard to catch. This is why following a severe cold front, I’ll prefer to wait three, four or five days before fishing. Let the clear skies and high winds subside, and wait just before the next overcast, rainy front moves in, and your stringers will be heavier as a result.”

The moral of all this, of course, is that anglers should be astute weather watchers. We should plan our fishing trips to coincide with an approaching cold front, and postpone trips at times when a front has just passed. Naturally, not all anglers can afford the luxury of fishing when weather conditions are ideal. But at least by understanding fronts and how they affect fish, anglers can concentrate their fishing efforts in the right areas of their favorite lake, stream, bay or sound.

Marine species are equally affected by fronts as are freshwater fish. Almost every saltwater angler has tales of fish suddenly acting nearly suicidal for no apparent reason. Yet much of the time the reason is simply the approach of a front. Along the coasts in summer, late afternoon thunderstorms are common. The approach of such mini-fronts frequently triggers marine gamefish into feeding binges almost impossible for some anglers to comprehend.

Some anglers believe fish perceive barometric pressure changes before a storm strikes, which prompts them to feed heavily. These fishermen reason that some type of instinct alerts fish to the fact that conditions will not be ideal for feeding for several days following passage of the front, so they must gorge just before it strikes.

Interestingly, many hunters have noted the same activity traits with game, especially deer, quail and waterfowl. The theory here is that game is on the move feeding before a front strikes. During the front—with its high winds, rain, lightning or even snow—game lays up and does not feed much. This sort of sixth sense of animals enabling them to anticipate weather changes has been studied by scientists, and there is no doubt that some innate instinct allows animals to know when violent weather is approaching.

Who is to say fish are any different? This in itself may explain why fish go on feeding sprees before fronts blow in.

Other factors that may explain why fish feed so heavily before an approaching front are cooler water temperatures and increased oxygen content of water.

Surface temperatures take a noticeable drop with an approaching front—since the air is cool, the rain is likely less warm than the lake surface, and the sky is overcast. This may prompt shallow migrations of gamefish, especially those inhabiting small lakes during hot weather. Cooling temperatures during a weather front also may cause baitfish to move into areas where they’re more vulnerable to bass and other gamefish.

Wind typically is associated with an approaching front. This not only breaks up the sun’s deep penetrating rays, but it disorients baitfish and increases the surface oxygen level. Rain itself churns the surface, cools it and adds oxygen. All these things may provide the necessary stimuli to “turn on” gamefish before and during the passing of a front.

Rain from fronts also “washes” food into lakes and rivers, which frequently causes fish feeding activity. Freshwater trout and bass fishermen most often encounter it during rainstorms. But tidal bays and marine marshes can swell during heavy rains, and when a tide falls redfish, seatrout, striped bass, flounder, tarpon and other saltwater gamefish are likely waiting with open mouths for the goodies washed out with the high water.

Finally, it should be noted that fishing fronts is not necessarily the most comfortable angling. Cold rain, wind and rough water can intimidate some fair-weather anglers into not being afloat or afoot when a front moves through an area. Indeed, fishermen never should take unnecessary chances with lightning cracking around them or when the wind whips the water into a dangerous caldron.

But the comparatively minor environmental discomforts encountered fishing a front usually are quickly forgotten when bass, brown trout, walleyes, kingfish, tarpon or any of dozens of other top-flight gamefish go into a feeding frenzy. It’s a time not easily forgotten, and one more anglers should anticipate can happen.