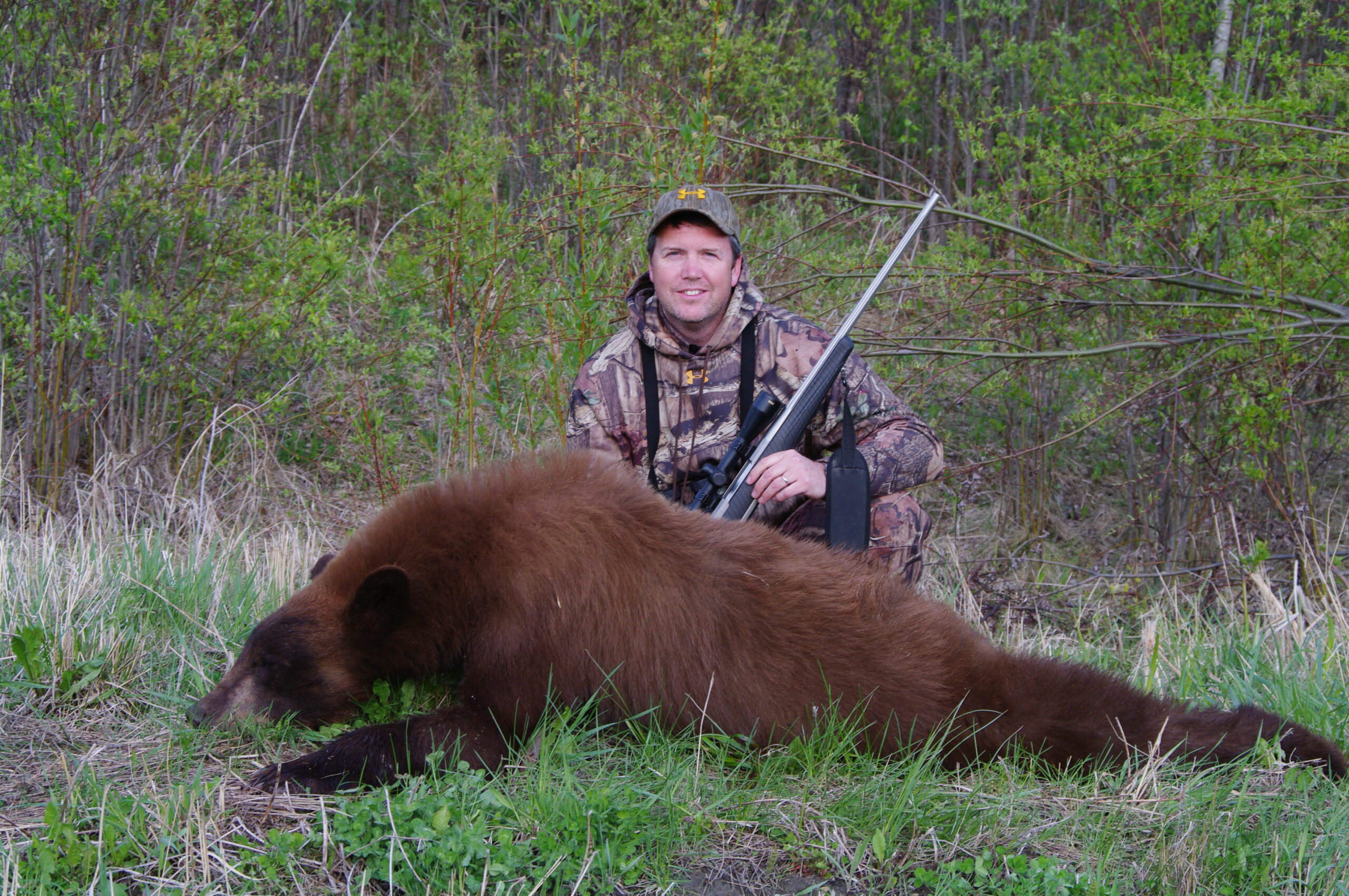 Black Bear: The Other Spring Craze

Turkeys may be the main game in town when it comes to spring hunting, but for true adventure, other hunters look to black bears.

Story and Photos by Doug Howlett

When it comes to springtime pursuits among sportsmen, no one can argue, the wild turkey reigns supreme. The thrill of calling in a gobbling tom makes turkeys the whitetail deer of the spring. But for those sportsmen who desire something a little more western, a little more wild and much larger game, the black bears of the American West and on up to Canada is where the real action is found.

Canada represents the most expansive opportunities for spring black bears with British Columbia offering a two-bear limit to hunters and some of the best spot-and-stalk opportunities available. Because of the thick, expansive forests of the other western and central provinces, sitting over bait is the tried-and-true and extremely productive method for hunting bears in Alberta, Saskatchewan and Manitoba. I’ve been several times to Alberta and, not wanting to particularly hunt over bait, pulled off a spot-and-stalk type hunt where we could travel the expansive network of energy company roads and upon spotting a bear, get out and try to work our way into shooting range after better sizing up the bear.

Quebec probably reigns supreme on opportunity in the eastern half of the country, though great hunting is also found in northern Ontario, New Brunswick and even Newfoundland for those hunters in the Northeast U.S. who don’t wish to travel so far.

In the states, Wyoming, Idaho and Montana lead the way for our nation’s increasingly limited spring opportunities. Montana was a longtime fave, until baiting and hunting with dogs was outlawed greatly hampering the odds for hunters seeking these reclusive spring denizens. Utah and Washington also offer some limited opportunities in the spring as does Alaska, which by far has the most bears of any state but is also the farthest and most expensive to travel to. But bears and hunting access abounds in the state once there. 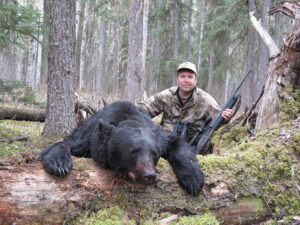 For all the hype and public perception of bears as dangerous game, the fact is, particularly when hunting over bait, a bow is a perfect choice for taking even the largest of bruins. The same set up—with either fixed or expandable broadheads—used on whitetails will easily take down a bear, though you definitely want something to leave a large wound channel as the thick hair can soak up the initial blood pouring from a wound, limiting the available blood trail in the vicinity where the bear was standing when shot.

If firearms are your preference, and in a spot-and-stalk situation, they certainly are handier. When it comes to centerfire options, hunters will want a bullet with good expansion, deep penetration and, above all, massive energy transfer. At the low-end of bear capable loads would sit a 95-grain .243 bullet and from there goes up to the elephant-worthy 500-grain .458 Win. Mag. Former and longtime Outdoor Life gun writer Jim Carmichel always recommended the .308, as it was readily available and provided both a mix of range and energy (and much less recoil than anything in the .400-caliber range). In that caliber, companies like Winchester offer loads ranging from 150 grains to 180 grains with a variety of bullet configurations intended for massive initial energy transfer upon impact and expansion for a large wound channel. Other great black bear calibers include the .270 Win., .280 Rem., .30-06, .300 Win. Mag. and .338 Win. Mag.

For my first bear hunt in Canada, I used a Winchester SXP slug gun—a shotgun I still interestingly use for most of my deer hunting back home in Virginia. Perhaps no firearm delivers better bear-busting performance than a 12- or even 20-gauge shotgun shooting hard-hitting slugs. For rifled barrels, I am still a fan of Winchester’s Dual Bond in a 375-grain 12-gauge saboted slug though they were a nightmare to find on shelves—any quality slugs for that matter—this past year during the pandemic. For smoothbore barrels, there are also a number of great options, my favorite being a 1 1/8-ounce rifled slug that should provide decent accuracy out to 80 to 100 yards with the right gun.

To really up the challenge and ideal as both a backup when traveling in bear country or when seeking out a trophy black bear, handguns are a fun and capable option. Hard-hitting bullets in the .40-caliber plus range are a must with popular choices falling on the .41 Mag at the lower end of the scale up to the hand-punching .500 S&W Mag. Top options for many hunters will fall on either the venerable .44 Mag or the big-game proven .454 Casull. 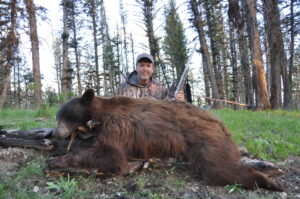 Get Your Hunt On

Of military lands that use iSportsman, U.S. Army Garrison Alaska (formerly Fort Wainwright) offers abundant spring bear hunting opportunities in the interior of Alaska. In the states, Wyoming-based guides, Table Mountain Outfitters, offers a thrilling and highly successful hunt opportunity in the rugged mountains of Idaho. A typical hunt begins in the morning with a pack of bear hounds in search of bears, with afternoon hunts spent over bait in the densely forested region.

Several years ago, I enjoyed the opportunity to hunt with Table Mountain owners Scott and Angie Denny and their awesome team of guides as guest of the Sportsmen’s Alliance. There I enjoyed some of the most exciting hunts for bear I’ve ever experienced with pursuit through the mountains behind a pack of hounds quite the workout. This is not a hunt for the sedentary sportsman. The terrain is steep and rugged, and bears can run for miles before baying up or treeing.

In Alberta, where the bears are as abundant as whitetails in Texas, hunting opportunities and outfitters to provide them seem as boundless as the land itself. The outfitter I enjoyed my first bear hunt with appears to no longer be operating, which was a shame because it provided a wilderness camp arrangement right off a winding river that was a cool experience and some great hunting to boot. I’ve also hunted with Red Willow Outfitters in the same province. Todd Loewen has been in the game a long time and offers traditional, comfortable lodging and hunts that run darn near 100 percent success.

While seasons in some areas run through June, Canada is still a near no-go for American hunters courtesy of a lingering pandemic, but all signs are on that it will be game on by next season, so start doing your research now. Spring bear hunts are relatively affordable compared to some other large trophy game and the thrill of spotting something large and clawed stalking through a shaded forest your direction is one that not even a wild turkey can replace.

Black Bear: The Other Spring Craze