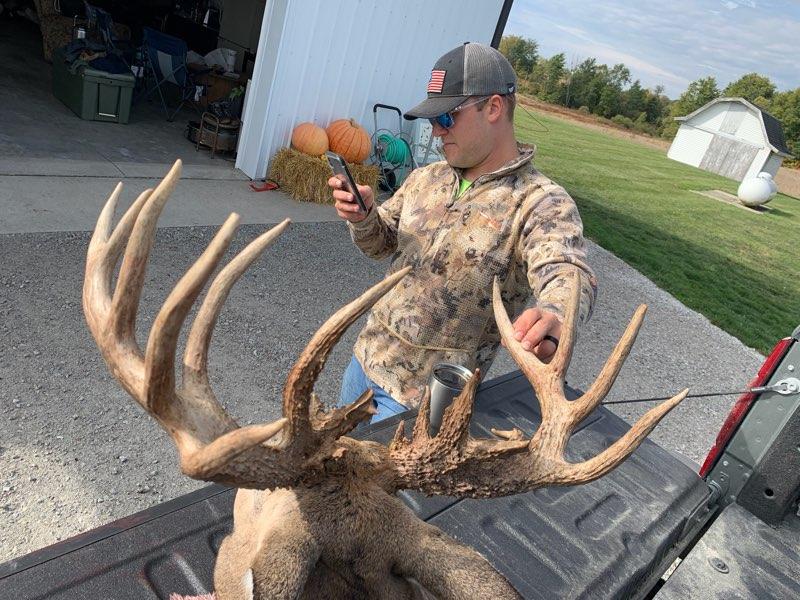 Indiana hunter Trace Koble managed to take down a massive 198 1/8 nontypical buck after intensively hunting the giant for weeks this past season. Having originally hunting waterfowl in what is known in Indiana as the Reduction Zone, Koble, in 2017, started hunting deer on the same property but was never serious about it until just last year. From September 15, when he killed a doe to qualify to hunt the Indiana Reduction Zone to October 2, Koble scoped out the buck, studying pictures, video and grazing patterns, to figure out the most opportune moment to catch him off guard.

He finally got a shot at the beast October 2 around 7:20 PM, but was more than disappointed when the buck didn’t fall after hitting him too far back. The buck retreated into the timber on the adjoining property where Koble didn’t have permission to go. Waiting until the next morning and after obtaining permission from the landowner of the adjoining property where the buck had gone, Koble and a group of family and friends set off in search of it. They eventually found the buck, but the celebration was muted. During the night, a pack of coyotes had virtually finished him off, leaving only the rack, head and cape intact. Koble green-scored the buck that bore a solid 5X6 typical frame with 8 nontypical tines that added an additional 40 inches alone to the overall measurements of the rack.

Read the full story by Dean Weimer on the Big Deer with Mike Hanback blog.